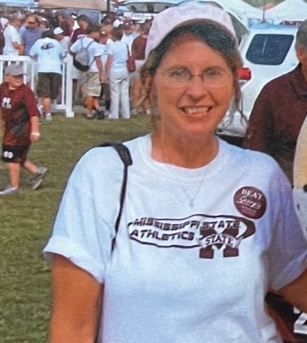 Alice Gale Ray McWilliams, 63, passed away on Saturday, March 5, 2022 at Baptist Hospital in Columbus. She was born on February 13, 1959 in Aberdeen to the late James Quinton Ray and Louise Pruett Ray.  Gale graduated from Aberdeen High School Class of 1977.  She went on to IJC in Fulton.   She worked as a Title Abstractor of several counties in North Mississippi and also worked for American Greetings, stocking cards at several retail locations.  She is married to Tommy McWilliams and they attend Bethel Baptist Church in Columbus.  Gales’s greatest gift in life was being the mother to her 4 children whom she adored and loved spending time with.  She was also a proud Grammy to her 4 grandchildren.  Family meant everything to Gale and she made sure each day to tell them how much she loved them.  She enjoyed fishing, working in her yard planting flowers and cheering on her grandson as he played sports.  She was devoted and passionate about walking everyday with her friend and walking buddy, Jane Nickerson.  They loved to walk throughout Aberdeen and on the trails along the Tenn Tom River.

In addition to her parents, she is preceded in death by her brother, Dale Ray and son in law, Robert Russell.

Visitation will be on Wednesday at the funeral home from 1 PM until 2:45 PM.

To order memorial trees or send flowers to the family in memory of Gale Ray McWilliams, please visit our flower store.